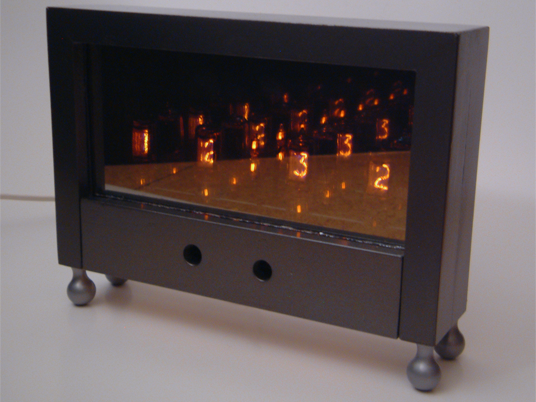 This was the first nixie clock, and indeed clock of any description, that I ever made. I had remembered nixie tubes from my youth and I started to search the web for information. I came across Mike’s Electricstuff and saw that it was possible to build a clock using discrete components such a cmos 4017 counters, which was about the limit of my electronic ability at the time.

Then began a hunt for some nixie tubes. After a fruitless search of various electronic surplus places in the UK who if they did have anything with nixies in it, they wanted a fortune for it (that means you Distel). I eventually bought a set of four HIVAC XN3s on Ebay and I was off and running. The circuit worked well, but the method of setting the clock with a magnet and reed switch is a nightmare – it is so easy to overshoot and then it is a tedious wait until the numbers come around again. There is a better way to do this and I implemented it.

A simple 4 tube clock seemed too boring, so I thought of doing a clock with an infinity effect. This works by placing half silvered film on the glass in front of the tubes and a mirror behind the glass. What you then get is mutliple reflections. You can see many of them receeding far into the distance. The camera picks up rather less than infinity, although the picture below gives the idea.

In addition this clock has the tubes on clear pedestals, in which there is fitted a small neon, which flicks across all four tubes, once a second as a kind of sweeping pulse. 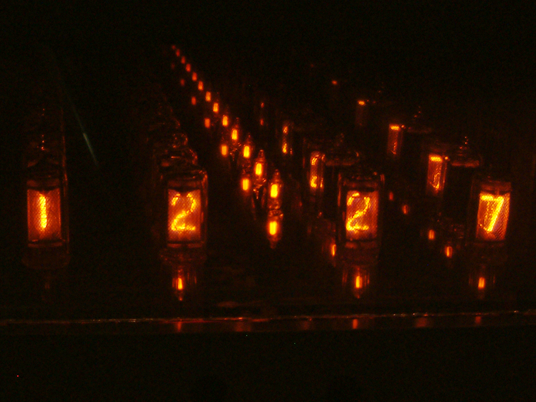 A successful clock idea and one I am still very fond of. I have plans for more infinity clocks and also for other special optical effects, which for now must remain secret. Ask and I may have to kill you..